Einstein’s theories state that nothing can go faster than light, not even forces and that Gravity is no exception, Newton had previously suggested in his laws that Gravity acts instantaneously on all matter in our Universe. 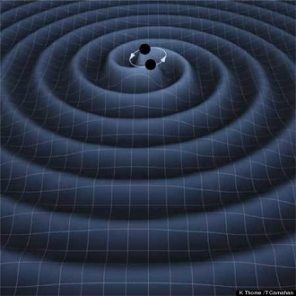 A Black Hole is a very large mass, starting from about 3.8 times the mass of our Sun and the largest measured being 40 Billion times the size of our Sun.

Black Holes are the eventual end of life for larger stars, where the gravitational force overcomes the force of dying nuclear fusion reactions within a star. The force pulls all of the particles in the star together forming what eventually becomes a Neutron star, where the negative electrons (the tiny particles that make electricity) are pulled into the positive parts of the atoms (Protons) as the gravitational force over comes the electrical.

The force also overcome the weak nuclear force between electrons and eventually the strong nuclear force that is holding the atoms (now made up nearly exclusively of Neutrons) apart.

It is this incredible amount of gravitation that forms singularities, which have all that mass in a tiny point. It also allowed scientists to measure the huge change in gravitational force experienced as a very large black hole “swallowed” a smaller black hole. What was measured was the ripple effect caused as the two spiralled closer and closer until they combined and the ripples ended. This proves that Gravity isn’t instantaneous but takes time to reach us and as the gravity changed it took time for us to feel the effects (although those effects were unnoticeable to the human body).

Future missions to study and detect gravitational waves include LISA Pathfinder; find out more about LISA and LIGO below.

Educational Resources available at ligo.org, ligo.caltech.edu and you can find more about LISA Pathfinder at sci.esa.int

If you are interested in Black Holes or research into Gravitational Waves, or the Robotics used to do Science on Earth or in Space then follow us and look out for future events.